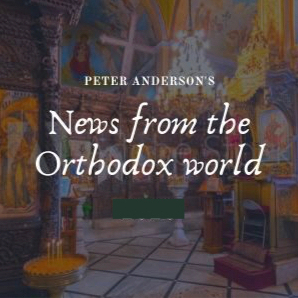 This afternoon (Thursday), during the Assembly of the Serbian bishops in the crypt of St. Sava Church in Belgrade, monk  Matej selected one of three envelopes that had been inserted in a copy of the Gospel.  Each enveloped contained a name of bishop who had been determined through an election by the assembled bishops.  The three names were: (1) Bishop Irinej of Bačka; (2) Metropolitan Porfirije of Zagreb and Ljubljana; and (3) Bishop Jefrem of Banja Luka.  The election process had lasted approximately four hours.  Through the action of the Holy Spirit, the envelope containing the name of Metropolitan Porfirije of Zagreb and Ljubljana was drawn.   http://www.spc.rs/eng/metropolitan_porphyry_zagreb_and_ljubljana_elected_new_patriarch_serbia;  http://tanjug.rs/full-view.aspx?izb=631549   Metropolitan Porfirije is relatively young, age 59, and has been Metropolitan of Zagreb (Croatia) and Ljubljana (Slovenia) since 2014.  His detailed biography with photos is found at http://mitropolija-zagrebacka.org/biografija-mitropolita-porfirija/.  This biography, found on the webpage of his eparchy, states that Bishop Irinej of Bačka is “his spiritual father.”  It comes as no surprise that Irinej and Porfirije were among the final three candidates.  I do not anticipate that his select with result in any immediate change in the position taken by the Serbian Orthodox Church on various issues including Ukraine.  It is reported that he has a good relationship with President Aleksandar Vučić of Serbia.

He is the winner of the award of the Theological Academy of St. Ignatius in Stockholm (Sweden) for 2016.  This recognition was awarded to him “for his contribution to the reconciliation of the people in the Balkans and his dedicated work on promoting unity among Christians.”  On the occasion of receiving the award, Metropolitan Porphyry gave a lecture on freedom and human rights in Stockholm.  Speaking about the fact that freedom and human dignity have their source in the Church of Christ, he said that “freedom of choice, freedom of conscience, free flow of people and ideas and material security of each individual are what Christianity as an authentic personalism brings with it” and pointed out that “this does not mean that Christianity stands for transient human values, but that it affirms the eternal values ​​in which man and his salvation are at stake.”

Having responsibility for the Serbian Orthodox Church in Croatia and Slovenia, he has had frequently contacts with Catholics, and the relationship has generally been good.  For some very recent examples, see http://www.spc.rs/eng/hierarchs_porfirije_jovan_and_heruvim_talked_bishop_skvorcevic; http://www.spc.rs/eng/meeting_between_metropolitan_porfirije_and_cardinal_bozanic_overcome_all_difficulties_together

On February 16, the Holy Synod of the Ecumenical Patriarchate elected Metropolitan Emmanuel of France to be the new Metropolitan of Chalcedon.  https://orthodoxtimes.com/metropolitan-of-france-was-elected-elder-of-chalcedon-and-bishop-of-abydos-metropoitan-of-kyrini-upd/      At the same time, the Holy Synod removed Metropolitan Athanasios from the Chalcedon see due to his “rebelliousness and disrespectful behavior.”  The Metropolis of Chalcedon includes the Asian part of Istanbul.  For Emmanuel, his new assignment appears to be a promotion.  Bartholomew held the position of Metropolitan of Chalcedon immediately before his election as Ecumenical Patriarch.  Metropolitan Meliton held the position beginning 1966 and served as the right-hand man of Ecumenical Patriarch Athenagoras.  When Athenagoras died in 1972, Meliton was heavily favored to become the next Ecumenical Patriarch, but his selection was vetoed by the Turkish government.  When Athenagoras was elected ecumenical patriarch in 1948, he was archbishop of North and South America.  The Archbishop of America is now Elpidophoros (Lambriniadis).  Both Elpidophoros and Emmanuel are possible successors to Bartholomew, who at age 80 may still have many more years to live.

Ecumenical Patriarch Bartholomew has given an interesting interview to the Italian Catholic newspaper Avvenire.  https://www.avvenire.it/chiesa/pagine/intervista-bartolomeo-patriarca-ecumenico-di-costantinopoli  Bartholomew covers a number of topics including Ukraine.  He also comments on primacy as follows:

Q. Pope Francis in the exhortation “Evangelii gaudium” indicated the Orthodox Churches as a model of synodality.  Do you think that, in order to serve the visible and universal unity of the Church, the “First Rome” would need more synodality and collegiality and the “Second Rome” (Constantinople) would need a more effective primacy?

A.  The modern discussion of the synodal structure of the Church, the understanding and application in practice of the principle of synodality, is an important theological achievement.  A central aspect of synodality is its essential connection with Eucharistic ecclesiology.  Not only are there excellent ecclesiological studies to understand the role of the “protos” (primus) in the Church on this basis, but also the Joint International Commission for Theological Dialogue between the Roman Catholic Church and the Orthodox Church has extensively worked on the question of “primacy” and of “synodality.”   The question posed, if the New Rome (not the “Second Rome”, since there was never a “First Rome”, but the “Old Rome”) would need a “more effective” primacy, does not correctly address the question.  The role of the patriarch of Constantinople is defined by the canons, and has so far been exercised, always within the framework of these canons, effectively.  Disputes over the effectiveness or non-application arise from a misinterpretation of the canons, usually in favor of those who do so.  Those who question the role of the ecumenical patriarchate in Orthodoxy introduce a new unstable ecclesiology.  As we have stated many times, the ecumenical patriarch cannot have “papal claims,” because we do not need a “Pope” for the functioning of synodality.  Synodality is inextricably linked not to the papacy, but to primacy, because there is no Synod without a primus.  This is a requirement of the Orthodox faith and not just of canonical convenience.

The 6th Belarusian People’s Congress was held in Minsk on February 11-12.  https://eng.belta.by/president/view/belarusian-peoples-congress-wraps-up-in-minsk-137447-2021/  Seated facing the 2,600 delegates and observers were the 77 members of the Presidium.  https://www.kp.by/daily/27238/4366027/  Both Metropolitan Veniamin, head of the Belarusian Orthodox Church (BOC), and Bishop Kazimir Velikoselets, Catholic apostolic administrator of the Minsk Archdiocese, were invited to attend the Congress and were made members of the Presidium.   As you can see from the photos in the two foregoing links, they were seated together close to the podium and only a few meters away from Lukachenko.  As a result of their seating location and their distinctive head coverings (the white veil and the zucchetto), they are very conspicuous in most photos of the speakers at the podium or of Lukashenko.   Perhaps their seating location was intentional on the part of the organizers.

The entire televised proceeding of the Congress can be seen at https://www.youtube.com/watch?v=mg3LGQKdHUs (first day) and https://www.youtube.com/watch?v=dieOiQTruqo (second day).  From watching the proceedings, one can see that the Congress was dominated by Lukashenko.  His opening address on the first day lasted for 3 hours and 40 minutes.  At the end of his address, he received a standing ovation by apparently everyone.  Of the televised proceedings on the second day, Lukashenko was talking more than one-third of the time.  Metropolitan Veniamin spoke for approximately eight minutes during the first day (beginning at 6:27:30 in the first video).  Bishop Kazimir was on the list of speakers scheduled for the end of the second day, but did not speak due apparently to a lack of time.  https://t.me/nashaniva/25666  The speech by Veniamin was prominently reported by the website of the BOC.  http://church.by/news/edineniem-i-ljubovju-spasemsja-mitropolit-veniamin-vystupil-na-vi-vsebelorusskom-narodnom-sobranii-v-minske  However, the website of the Catholic Church in Belarus (catholic.by) was completely silent about the Congress and the presence of Bishop Kazimir at the Congress.  It is also interesting that the very vocal anti-protester Mother Gabriela from Grodno was seated in the center of the first row of delegates.  https://irp.news/pravoslavnyj-i-katolicheskij-ierarhi-v-prezidiume-vsebelorusskogo-sobranija/(see second photo).  A number of weeks earlier, she had received a state award from Lukashenko.  http://obitel-grodno.by/index.php?option=com_content&view=article&id=158

The commemoration of the 5th anniversary of the Havana meeting between Patriarch Kirill and Pope Francis was held on February 12 with an online conference including Cardinal Kurt Koch, Metropolitan Hilarion, and others.  The topic of the conference was “The Church and the Pandemic.”  https://mospat.ru/en/news/60968/;  http://www.christianunity.va/content/unitacristiani/en/news/2021/2021-02-15-conferenza-online-con-il-patriarcato-di-mosca-.html   (English summaries of the conference)  A video of the conference can be seen at https://www.youtube.com/watch?v=nREz5j__73w .  The text of Metropolitan Hilarion’s presentation is found at https://mospat.ru/ru/news/decr-chairman/60981/  (Russian), and the text of Cardinal Koch’s presentation is at http://www.christianunity.va/content/unitacristiani/en/cardinal-koch/2021/greetings-and-messages/bref-discours-d-introduction-pour-le-cinquieme-anniversaire-de-l2/it.html (Italian).

On the same day, there was an online meeting of the Joint Working Group for Cultural Projects between the Holy See and the Russian Orthodox Church.  http://www.christianunity.va/content/unitacristiani/en/news/2021/2021-02-15-gruppo-coordinamento-progetti-culturali-santa-sede-ch.html  One of the participants in the meeting was the well-known Metropolitan Tikhon of Pskov, Chairman of the Patriarchal Council for Culture.  https://mospat.ru/ru/news/60980/