Peter Anderson – 4 October 2021: Bartholomew and Hilarion at the Vatican & other news 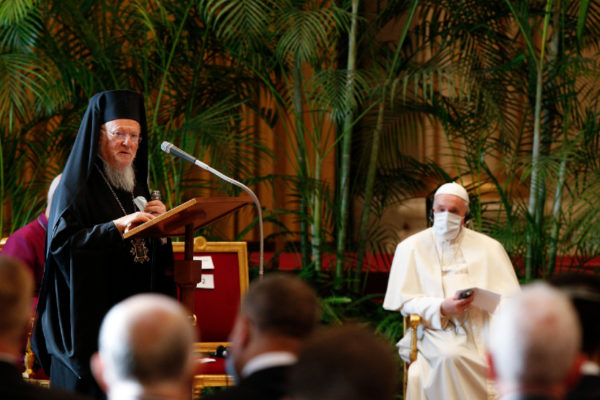 Today, October 4 (the Catholic feast of St. Francis of Assisi), there was an important gathering of religious leaders, scientists, and experts at the Vatican.  The title of the event was Faith and Science: Towards COP26, and it was organized by the British and Italian Embassies to the Holy See.   At the meeting, the participants signed a joint appeal to the forthcoming U.N. COP26 Climate Conference to be held in Glasgow, November 1-12.  http://www.christianunity.va/content/unitacristiani/en/news/2021/2021-10-04-pope-francis-and-cop26.html  Orthodox representatives and speakers at the meeting included Ecumenical Patriarch Bartholomew and Metropolitan Hilarion, head of the DECR of the Moscow Patriarchate.  https://mospat.ru/ru/news/88175/  The WCC was represented by its Acting General Secretary, Father Ioan Sauca (Romanian Patriarchate).  The text of the signed appeal can be read at https://press.vatican.va/content/salastampa/it/bollettino/pubblico/2021/10/04/0630/01349.html#inglese

A video of the entire program can be seen at https://www.youtube.com/watch?v=eVOoncpD-X0 (many of the presentations are in English) .  The address by Ecumenical Patriarch Bartholomew begins at 42:40 in the video, and the address by Metropolitan Hilarion begins at 53:35.  For me, it was fascinating to see these two hierarchs seated for over one hour very close to each other, separated only Archbishop Justin Welby of Canterbury.  Although I saw no interchange between the two, the Ecumenical Patriarch did applaud at the end of the address by Metropolitan Hilarion.

On September 27, Patriarch Kirill presented church awards to Metropolitan Hilarion and his three vice-chairmen.  https://mospat.ru/en/news/88140/  The remarks by the Patriarch Kirill included the following:  “And we humanly very much upset by the fact that today the Patriarch of Constantinople has lapsed into schism because he took communion together with schismatics and recognized self-ordained clergy who do not have lawful consecration by canonical hierarchs.”   To the best of my knowledge, this is the first time that Patriarch Kirill has called Ecumenical Patriarch Bartholomew a schismatic.  It appears that as time goes on, the strategy of the Moscow Patriarchate is to raise its attacks against Constantinople to a higher and higher level.  Patriarch Kirill also stated that he personally knows Patriarch Bartholomew well and that “probably, he was guided not by his own reason and not by his own will.”  Still, Patriarch Kirill rejects the argument that Bartholomew could not do otherwise because of “mighty outside forces.”  He gives the example of earlier Patriarchs of Constantinople who were martyrs and confessors.

This weekend, Metropolitan Hilarion, on his television program Church and the World, spoken about the decision made by the Holy Synod at its last meeting concerning certain priests within the Patriarchate of Alexandria.  http://www.patriarchia.ru/db/text/5849436.html  He stated that there were “several dozen” priests who did not agree with “the recognition of the schism” in Ukraine and who requested Patriarch Kirill to accept them into the Russian Orthodox Church.  Because the Patriarch of Alexandria and the head of the OCU have now celebrated the Divine Liturgy together, Metropolitan Hilarion said that the Russian Orthodox Church has no reason to refuse the appeals.  He added: “How long they will be considered, how our presence in Africa will be structured – we have yet to decide at the next meetings of the Holy Synod.”

Patriarch Porfirije of Serbia has now made his second visit to Montenegro since his election as patriarch.  This time the Patriarch enthroned His Grace Metodije as Bishop of Budva-Nikšić.  The enthronement occurred on September 25 at the Đurđevi Stupovi Monastery near the town of Berane, Montenegro.  The ceremony took place “in a peaceful atmosphere.”  https://www.politika.rs/scc/clanak/488486/Ustolicen-episkop-budimljansko-niksicki-Metodije  One can watch a video of the entire event at https://www.youtube.com/watch?v=wkSKKw5s1Rc&t=3s (over 3 hours long).   During the course of the Liturgy, one can see (from 1:19:30 to 1:24:30 in the video) the unfurling over the heads of the faithful attending the Liturgy a huge Serbian tricolor flag which is more than 300 meters long.

As far as I am aware, there were no objections or protests in Montenegro to Patriarch Porfirije coming to Berane to perform this enthronement.  However, when Patriarch Porfirije came to the monastery in Cetinje, Montenegro on September 5 to enthrone Metropolitan Joanikije (Mićović) as Metropolitan of Montenegro and the Littoral, there were great protests by certain Montenegrins, and the Patriarch only obtained access to the Cetinje Monastery through the use of an army helicopter.  Why were there such great protests in Cetinje but none in Berane?   The ethnic composition of Cetinje is 91% Montenegrin, while Serbs are the largest ethic group (namely 43%) in Berane.  However, more importantly, Montenegrins consider Cetinje and its monastery to be the seat of their national identity.  The strong pro-Serbian aspects of the enthronement in Berane, exemplified by the huge Serbian flag and the many Serbian tricolor banners, perhaps make a little more understandable the concerns of certain Montenegrins that an enthronement in Cetinije would be a symbol of pro-Serbian sentiments overshadowing Montenegrin independence.   Still, the barricades by protesters were very unfortunate.

Archbishop Mieczysław Mokrzycki of Lviv (Latin-rite) has given an interesting interview to the Polish Catholic news agency KAI.  https://www.ekai.pl/abp-mokrzycki-trwa-wiosna-kosciola-na-ukrainie/  Archbishop Mokrzycki was a personal secretary for Pope John Paul II from 1996 until the Pope’s death in 2005 and then a personal secretary to Pope Benedict XVI.  Mokrzycki has been the archbishop of Lviv since 2008.  When asked if Ukraine expects a visit from Pope Francis, the Archbishop replied:  “I learned that the Holy Father is planning such a visit next year.”  The Archbishop is optimistic that in the future the churches of Ukraine will cooperate more with each other and that “there will be some symbiosis between the Moscow Patriarchate and the Orthodox Church of Ukraine.”

Interestingly, in the final years of Pope John Paul II there were two cardinals in Ukraine – Cardinal Jaworski of Lviv (the predecessor of Archbishop Mokrzycki) and Cardinal Husar (head of the UGCC).  Now there are none.  In fact, Pope Francis in the eight years of his pontificate has not made a single ordinary (head of a diocese) in Eastern Europe a cardinal.  Of the 101 cardinals appointed by Pope Francis, only three have roots in Eastern Europe.  Archbishop Emeritus Sigitas Tamkevicius S.J. of Kaunas (the survivor of a gulag) was made a cardinal, but this did not occur until a few months after his 80th birthday (thus making him ineligible to vote in a conclave).  Father Konrad Krajewski, a Pole, was made the Papal Almoner and an archbishop in 2013 and then a cardinal in 2018.  However, he has lived in Rome since 1998 and has never been a bishop in Poland.  Father Ernest Simoni of Albania (a survivor of many years of communist imprisonment) was made a cardinal when he was 88 years of age and has never to date received episcopal ordination.  On the other hand, it must be said that Pope Francis has visited as pope 14 Eastern European nations.

Lastly, there is a media report that Pope Francis will visit Malta on December 2-3, Cyprus on December 4, and Greece on December 5-6.  http://www.independent.com.mt/articles/2021-10-03/local-news/PM-Abela-to-meet-Pope-this-week-December-visit-on-agenda-6736237238  There has been no confirmation of these dates by the Vatican.