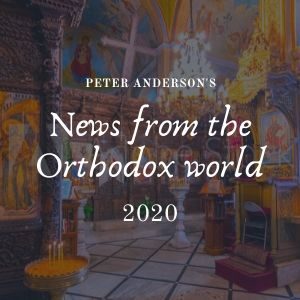 At approximately 2:30 a.m. on December 29, the parliament of Montenegro approved amendments to the very controversial law on religion which had been passed during the early morning hours of December 27, 2019, and signed by President Milo Djukanovic on December 28, 2019.  It was hoped that the amendments would be passed on the one-year anniversary date of the controversial law, and this hope was missed only by two hours.  The amendments were passed by 41 deputies out of a total of 81.  https://www.vijesti.me/vijesti/politika/498929/usvojene-izmjene-zakona-o-slobodi-vjeroispovijesti  The opposition delegates boycotted the session.  The amendments addressed the parts of the law on religion which the Serbian Orthodox Church had found objectionable.  The entire 11-hour session can be watched at https://www.youtube.com/watch?v=8Vc4ES3Wadk&feature=emb_logo.

The final vote was proceeded by high drama.  During the day of December 28, thousands outside the parliament demonstrated against the proposed amendments.  https://www.newstimes.com/news/article/Protests-erupt-against-new-Montenegro-govt-over-15831356.php  The quorum at the beginning of the session on December 28 was determined by including two deputies who were not physically present due to Covid quarantines, but who participated online.  During the session, it was announced that one of the majority delegates, Filip Adžić of the Black and White Party, had resigned.   Suada Zoronjić was immediately appointed by the Black and White Party to fill the vacancy, but the State Election Commission refused to affirm the substitution.   https://www.vijesti.me/vijesti/politika/498903/dik-odbio-da-verifikuje-mandat-poslanici-crno-na-bijelo  The majority of the parliament found this refusal by the Commission unlawful, and the majority itself confirmed the substitution.  https://www.vijesti.me/vijesti/politika/498929/skupstina-verifikovala-mandat-suadi-zoronjic  In the final vote, one of the deputies voted for the amendments online.  The minority deputies have stated that these events will form the basis for court proceedings to declare the final vote illegal.

In October, there had been a dispute among the victorious parties that prevailed in the August 30 parliamentary elections as to whether the controversial law should be repealed in its entirety or simply amended.  The pro-Serbian Democratic Front, the largest party in the victorious coalition, insisted that the law be entirely repealed because that had been its promise during the election campaign.  https://www.cdm.me/politika/knezevic-i-mandic-razgovarali-s-abazovicem-dogovor-i-dalje-daleko/   On December 23, the leading hierarch of the Serbian Orthodox Church in Montenegro stated the Church had only demanded from the previous government certain changes to the law and would take the same position with the new government.  http://www.spc.rs/eng/reaction_relating_media_coverage_bishop_joanikijes_statement  The latest statement by the Church is that the amended law should be given time to operate and that a new law can then if considered if necessary.  https://mitropolija.com/2020/12/27/o-velibor-dzomic-uklonjene-neustavne-i-diskriminatorne-odredbe/

On a different subject, the Serbian Patriarchate announced in a press release on December 25:  “The Holy Synod of Bishops, on its session on 24 December 2020 brought a decision to summon the Holy Assembly of Bishops for the election of a new Primate of the Serbian Orthodox Church, which will be held on 18 February 2021.”    According to the constitution of the Serbian Patriarchate, the election of the new patriarch must occur within three months of the death of the preceding patriarch.  The February 18 date is one day before the end of the three-month deadline.   It appears that the current procedure for the election of a new patriarch was formulated in 1967.  The latest text of the Constitution of the Serbian Orthodox Church posted on its website is dated 1957.  https://www.rts.rs/page/stories/ci/story/124/drustvo/4157502/spc-izbor-patrijarh.html  Reference to the 1957 constitution is misleading because it does not reflect the procedure that will in fact be used.  The following links describe the current procedure:  https://tekdeeps.com/towards-the-election-of-the-new-head-of-the-serbian-orthodox-church-3-prayer-then-the-draw/ ;  https://www.rts.rs/page/stories/ci/story/124/drustvo/4157502/spc-izbor-patrijarh.html ;  https://www.youtube.com/watch?v=YfcnPkckU4w  (3-minute video in English).  Under the current procedure, the Holy Assembly of Bishops will conduct the election.  The Assembly consists of the active bishops and vicar bishops (a total of 43 bishops) of the Serbian Orthodox Church.  Two-thirds of their number (29 bishops) is the necessary quorum.  Candidates for patriarch must have governed a diocese for a minimum of five years.  Voting is conducted by secret ballot until one of the bishops receives a majority of the votes.  This bishop becomes Candidate No. 1.  Voting is then conducted again until a second bishop receives a majority.  This bishop becomes Candidate No. 2.  Another final round of voting is conducted until a third bishop receives a majority, and he becomes Candidate No. 3.  The names each of the three candidates are then placed in sealed envelopes, and the sealed envelopes are the inserted between pages at the beginning, middle, and end of a gospel book, which is then placed on the altar.  A highly-respected monk will then select one of the envelopes, and the person named in the selected envelope will be the new patriarch.  Prayers to the Holy Spirit are conducted at various stages in the process.

In Belarus, Catholic Archbishop Tadeusz Kondrusiewisz returned to Minsk on December 24.  His first action was to visit the Apostolic Nunciature to extend his deep gratitude to Pope Francis and Apostolic Nuncio Archbishop Ante Jozić as well as Cardinal Parolin and Archbishops Gallagher, Mennini, and Gugerotti for what they had done to obtain his return to Belarus.  https://catholic.by/3/news/belarus/12642-artsybiskup-kandrusevich-vyarnu-sya-belarus-jon-dzyakue-papu-frantsishku-i-sim-khto-getamu-paspryya  He also “gratefully accepted” the decision of the state authorities to allow his return.  Archbishop Kondrusiewicz then conducted a news conference with journalists.  https://news.tut.by/society/712713.html  In describing his crossing the Belarus border on his return, the Archbishop, very visibly moved and almost losing control of his emotions, stated:  “Today, when I was crossing the border, I asked the driver to stop, knelt down, thanked God for the return, kissed the ground.  This is my land!  I grew up here!  And I have never opposed Belarus, I have always protected its interests and I will continue to do so.”  See video at 3:15  https://www.youtube.com/watch?v=xM3hiGaaMlE   (also interesting to read are the many YouTube comments posted by viewers).  As you may recall, President Lukashenko had stated on November 2 that Kondrusiewicz “went to Poland and was instructed on how to destroy the country.”  https://eng.belta.by/president/view/lukashenko-belarus-will-always-be-committed-to-interreligious-peace-134692-2020/

Archbishop Kondrusiewisz celebrated two Masses on Christmas eve at the Catholic cathedral and two Masses on Christmas day at the Red Church.  At the Mass celebrated in Belarusian at the very crowded cathedral, both the apostolic nuncio and the representative of the Belarusian Orthodox Church (BOC), Archpriest Alexander Shymbalyov (Deputy Chairman of the Synodal Department for Church-Society Relations) were present and spoke.  https://catholic.by/3/news/belarus/12648-artsybiskup-kandrusevich-u-minskaj-arkhikatedry-vigiliyu-bozhaga-naradzhennya-adchynim-dzvery-ezusu-i-dazvolim-yamu-navedats-nas  Father Alexander conveyed Christmas congratulations from Metropolitan Veniamin, head of BOC, and also congratulated Archbishop Kondrusiewicz on his return to Belarus.  The following short video shows the applause that the Archbishop received at the beginning of Mass at the cathedral.  https://www.youtube.com/watch?v=VjQ5MyRdOkY&feature=youtu.be (1+ minutes; over 150,000 views)

On December 25, President Lukashenko, in answering a question by a journalist, described the decision-making process in allowing Kondrusiewicz’s return.  https://eng.belta.by/president/view/no-political-games-behind-return-of-belarusian-catholic-church-head-to-belarus-136189-2020/  He described the Pope’s letter as follows:  “Small font, two sheets of paper.  A lot of kind words addressed to the state and the people.  A good man.  One of the questions was to return Kondrusiewicz back to Belarus for Christmas.”   Lukashenko also spoke highly of Archbishop Gugerotti, the former nuncio to Belarus, who had brought the Pope’s letter to Lukashenko.  “He loves the Belarusian nation a lot and has always sincerely and honestly spoken in support of our people.”  At the meeting with Gugerotti, Lukashenko promised that he would provide that evening an answer with respect to the return of Kondrusiewicz.  Lukashenko then consulted the key government representatives, and they believed that “it was necessary for Tadeusz Kondrusiewicz to return to Belarus for the Catholic festivities.”  This coincided with Lukashenko’s own view.  If this account is correct, it does not appear that the return of Kondrusiewicz was negotiated with certain conditions attached.

In Cyprus, Archbishop Chrysostomos, primate of the Church of Cyprus, has given an interview to the newspaper Politis that was posted on December 28.  https://politis.com.cy/politis-news/kypros/synenteyxi-archiepiskopoy-meros-v-chtenizoyn-genia-kai-manikonontai-gia-na-me-diadechthoyn/    A short English-language summary of parts of the interview is found at https://orthodoxtimes.com/archbishop-of-cyprus-crisis-in-orthodoxy-for-ukraine-has-always-existed-i-knew-half-truth-when-i-supported-moscow/  Among other interesting points, Chrysostomos stated:  “ Prior to the Synod, in January 2016, we held a Synod of Primates in Switzerland. The issue of Ukraine was discussed in particular by the Ecumenical Patriarch with the Patriarch of Moscow.  Kirill promised to go to the Great Synod on the condition that the issue of Ukraine not be discussed and that he be given four years to find a solution.”  Two hierarchs of the Church of Cyprus have already expressed strong objections to the Politis interview.  https://www.romfea.gr/epikairotita-xronika/41286-kukkou-nikiforos-dustuxos-o-tropos-sumperiforas-tou-arxiepiskopou-den-einai-prosfatos (Metropolitan Nikiforos of Kykkos); https://www.romfea.gr/epikairotita-xronika/41285-lemesou-einai-emfanes-oti-i-prospatheia-tou-arxiepiskopou-aposkopei-sto-gnosto-diairei-kai-basileue (Metropolitan Athanasios of Limassol)