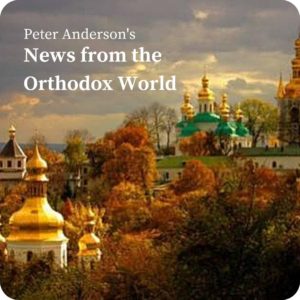 Today, I received the very sad news that Father Leonid Kishkovsky, who for many years has been the Director of the Office of External Affairs and Interchurch Relations for the Orthodox Church in America, died last evening, August 3, at a hospital in Glen Cove, New York.  I talked this morning to Matushka Mimi, his wonderful wife for 52 years, who was with him when he died.  She told me that he died very peacefully.  Father Leonid had a major heart attack yesterday morning and multiple organs were affected.  He was put on a ventilator, but did not make it through the night.  At the hospital, Metropolitan Tikhon, primate of the Orthodox Church in America, anointed Father Leonid.  Later, Archbishop Michael of New York and New Jersey served a Panikhida at Father Leonid’s bedside. 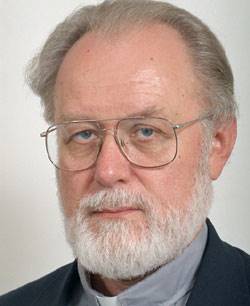 In recent years, Father Leonid had a number of operations on his feet due to his diabetes.  On April 27, 2020, his left leg was amputated below the knee.  There were complications after that.  However, he continued his work as rector of Our Lady of Kazan Church in Sea Cliff, New York, a position that he held since 1974.  As Director of the Office of External Affairs, he also worked at the Chancellery of the Orthodox Church in America in Syosset, located only ten miles away.   The following is a short video of Father Leonid giving the sermon this year on Palm Sunday.  https://www.facebook.com/sophia.kishkovsky/posts/10159511428222704  This video was posted by Father Leonid’s daughter Sonia, who lives in Moscow with her husband and who writes for The New York Times on subjects relating to Russia and religion.

Father Leonid held many leadership positions in the field of ecumenical relations.  He was President of the National Council of the Churches of Christ in the USA from 1989 to 1992.  He was the first Orthodox to head that largely Protestant body.  At that time, The New York Times wrote:  “Father Kishkovsky said in an interview last week that his election represented ‘a growing pluralism’ and recognition of an Eastern Orthodox tradition that could mend the breach between liberal and conservative Christians.”  https://www.nytimes.com/1989/11/19/us/orthodox-priest-leads-protestant-group.html   Subsequently, a new organization was formed in the United States to bring together Protestants, Orthodox, and Catholics.  It is called Christian Churches Together.  Its first formal annual meeting was in January 2008.  At that meeting, Father Leonid was elected to be the “moderator” of the new organization – the top leadership position.  He was elected because of the high regard in which he was held by Protestants, Orthodox, and Catholics.   With regard to the World Council of Churches, Father Leonid served at various times on its Executive and Central Committees.

Father Leonid was born in Warsaw in 1943.  His family fled from Warsaw just before the Warsaw uprising and became war refugees in Germany.  They immigrated to the United States with the status of “displaced persons” and lived in Los Angeles.  Father Leonid was fluent in Russian, and this was a very valuable asset for the very important role that he played in contacts between the Orthodox Church in America and the Moscow Patriarchate.  I know that he was highly regarded at the Moscow Patriarchate.  As the “foreign minister” of the Orthodox Church in America, he traveled extensively and had close contact with many Local Orthodox Churches.

I was privileged to have Father Leonid as a friend.  I first met him in September 1989 when he came to Seattle to see Metropolitan (later Patriarch) Alexy, who was in Seattle for ten days as a guest of the Leningrad – Seattle Sister Churches Program.  Since that time, I have exchanged many telephone calls and emails with Father Leonid, and he has been a guest at my home.   He was a wonderful person, and I can certainly understand why he was held in such high regard by so many others.   Like the Apostle Nathanael, he was “without guile.”  His observations were always very objective and without any bias one way or the other.  One knew what he said was absolutely true.  It was a privilege to hear his insights.  Perhaps that is the reason that people of other faiths trusted him so much.

Father Leonid was a builder of bridges.  He reminds me of the recently-elected Patriarch Porfirije of Serbia, who believes in “building bridges and establishing dialogue with everyone.”  Father Leonid spent much of his life bringing together on common issues Christians of very diverse denominations.  He was a consummate bridge builder.

Today, “ecumenism” in the eyes of some Orthodox is a very derogatory word.  In fact for some conservative Orthodox, it is one of the worst heresies.  Father Leonid was totally immersed in ecumenism.  Yet, I have not heard of any attacks on Father Leonid.  In my opinion, the life of Father Leonid proves that one can seek to build bridges and create better understanding between various Christian denominations without compromising in any way one’s Orthodox faith.  Father Leonid was a real blessing for all of us.  Eternal Memory, Father Leonid!