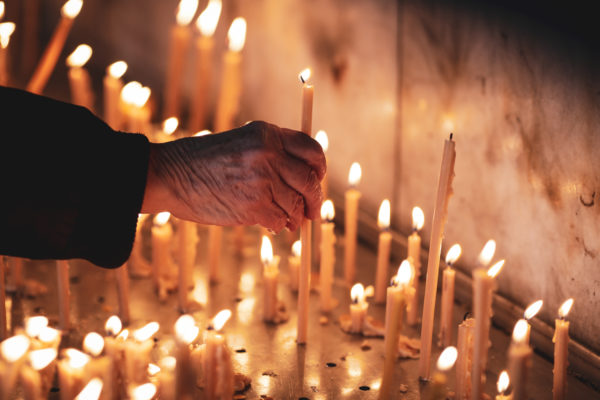 The religious orders of the Eastern Catholic Churches are quite different from those of the West. There are nuns and brothers – but they are usually found only in monasteries. For example, Holy Resurrection Monastery in the Mohave Desert of Southern California includes a number of monks who are not priests. Those who are fully professed are called “Father,” while the others are called “Brother.” As in the West, nuns are called “Sister.”

Catholic religious orders in the East follow the rules of Saint Basil and, consequently call themselves “Basilians.” To take this a little further, there are two major Basilian orders in the Melkite Church: the Salvatorians and the Shuwerites. While both are monastics, there are such significant differences that they might as well be totally different orders.

Most Eastern religious are monastics and, consequently, are not often seen in parishes or schools, as is typical of Latin Catholic religious orders. Unlike many Orthodox monks, Eastern Catholic monks may be seen in activities outside their monasteries.

How are priests and deacons assigned to parishes in Eastern Churches? How often are they transferred?

In general, the assignment of priests and deacons functions much like the process in the Latin Church. The bishop examines the needs of the parishes and assigns priests who can meet those needs. Deacons who are going ton to the priesthood are generally assigned in the same fashion, but only for a time. Permanent deacons usually are assigned based upon where they live and are, in general, not transferred unless they move or ask to be transferred.

There is no general answer for how long a priest may be at his assignment. Most of the Eastern Catholic Churches do not have such an exceptional number of priests that they can rotate men at will. Most parishes tend to be one-priest parishes, and thus clerics serve for long periods of time to allow them to develop some continuity in their programs and in the development of the spiritual and parish life of their communities.

What ever happened to the principle of “one city, one bishop”?

The principle of “one city, one bishop” worked well when there was less movement of people. That is, in the past, multiple generations of a family tended to be born, marry, have children, and die all in the same place. Since bishops have geographic limits, this worked well. However, as the migration of people from place to place became more pronounced, the principle began to be more difficult to enforce.

People wanted to keep their own traditions and forms of worship, and this was difficult if the form they were used to was not available. Then they would either adapt to what was present, or ask for priests who knew how to serve them. Here in the United States we experienced this in the growth of the national churches for the Germans, the Poles, the Italians, and the Irish, especially on the east coast and in Chicago. Each nationality brought its own priests. This wasn’t a problem because all were of the Latin Rite.

Things became complicated when people from Eastern Churches moved into a mostly Latin area. Often the Latin bishop was asked to support the Eastern traditions. In some cases this worked well; in others it was a disaster. In the latter case, the people asked their bishops “back home” to send priests and, eventually, asked for their own bishops.

When bishops were sent or appointed, the “one city, one bishop” concept was fully obviated. It was no longer possible to support a single city with a single bishop, and overlapping territories appeared. For example, the Melkite bishop of the United States has jurisdiction over all fifty states! Clearly his territory overlaps that of many Latin Rite bishops, but it happens to also overlap that of two Maronite bishops (the Eparchy of New York and the Eparchy of Los Angeles), and so on.