Liturgical Distance and the State of the Church

This is a strange world that we’re living in…

There are challenges to our Faith in isolation, and disagreements about what Churches should do about the current restrictions. Should churches be exempt from prohibitions on gatherings much in the same way as grocers are? Is worship an “essential service?” Can community be replicated or a relatively good substitute be found in a Zoom meeting or Facebook Live event?

The Pope even weighed in on this during a morning homily recently – something that had not been televised or streamed on a regular basis, but is now accessible to anyone with an internet connection on a daily basis! He recounted a gentle scolding that he had received from a bishop who remains unnamed who says Francis has not made it clear that watching Mass on screen is not the same as receiving the Eucharist. Spiritual Communion is not equal to actual Communion.

Does that need to be spelled out? Are we really at risk of becoming complacent with a facsimile of attendance in which your IP address being linked to the Facebook account streaming from your priest’s cell phone in a make-shift chapel in their living room “counts” as having fulfilled your Sunday obligation? While the ability to stay in pajamas with coffee in hand and chant ancient Liturgy is convenient, and even at times pleasant, it does not hold a candle to the sensory experience of the holy space, the scent of the incense, the taste of the holy things for the holy. One cannot be initiated into the faith without the actual stream of Living Water over you and the oil glistening on the forehead of the newly made Christian. The Spirit calls, gathers, enlightens, and sanctifies the whole of the community of faith in community – and without proximity, we are left hungry.

Hungry is exactly the word for it. We are hungry for more. While the Holy Father of Rome was right to point out that the current state of the Church with so many not able to gather in person isn’t good enough for the long-term, he didn’t have to say it.

Some regions and Diocese have gone so far as to disallow any celebration of sacraments – not just going without public Eucharist, but also no Baptism, no Marriage, no Reconciliation, and even no Extreme Unction. In our area, anything that can be done in a group less than 10 people is still possible (so long as some social distance is practiced) so confessions are done at 10 feet of distance, baptisms and marriages are small group events, and anyone who is in danger of death is absolutely able to request last rites. It is good – forgiveness and grace are there, thankfully. Mass is being offered. There is no question about that – the clergy are faithful in joining themselves and their prayers to the holy and eternal sacrifice of Christ, and in so doing, they are offering it for the sake of the world. Christ is made present…for us. The Eucharist is confected and consumed…for you. From the rising of the sun to it’s setting, a pure sacrifice IS being offered. And yet, we hunger to take part in it. 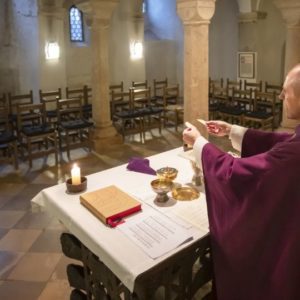 Some places have not restricted attendance to the Eucharist. It seems that this is happening more in Orthodox jurisdictions. I can respect that. But is it safe? Are we putting the health of the faithful at risk when we allow their piety to put them in the way of viral infection? These clerics firmly stand by their decisions, and there have been arrests made because of this “crime.” And yet, grocery stores continue to be filled.

We seek community and we seek faith where we can find it. The People of God find a way. We do what we can, whether it is through Prayer or Catechesis, Divine Liturgy or Pilgrimages, we seek the Lord where he can be found – even if that is on our computer screens.

And so we are asking.

We have been reaching out to hierarches and leaders in Orthodox and Catholic Churches. These are busy people, but we have began hearing from some of them.

I look forward to sharing with you what we’re hearing!